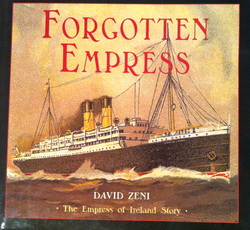 The story of the sinking of the Empress of Ireland, Canada’s worst maritime disaster, is one few people today know much about. For whatever reason, it seemed to be lost in both the St. Lawrence and in history. Maybe it happened too soon after the sinking of the Titanic, a similar tragedy only two years before. Maybe it was forgotten because her passengers were not rich and famous New York socialites. Most likely, it got lost among the headlines, overshadowed as the First World War broke out only ten weeks later. In any case, the story of its collision, of its foundering, and of the 1012 souls lost with the Empress of Ireland sank from memory.

Now, a hundred years later, we try to piece together that part of our story. We must remember, to honour the people who lost their lives in the tragedy and all those who lived on in silent grief.

Though Ellen Hardy and Jim Farrow are fictional characters, I hope their journeys ring true. Their experiences are based on research and accounts of surviving crew and passengers, in particular Fourteen Minutes by James Croall and Forgotten Empress by David Zeni. These two books were vital in preserving the history of the Empress of Ireland and for that we all owe both authors our gratitude. Titanic Survivor: The Newly Discovered Memoirs of Violet Jessop by John Maxtone-Graham provided great insight into life as a stewardess and a survivor. After researching hundreds of Titanic survivor accounts, I wondered how someone gets past such a horrific tragedy. Most people, it seemed, simply did not speak of it. Many lived half-lives burdened by the guilt of having survived when their loved ones did not. Yet Ms. Jessop lived all her days as much more than “Titanic survivor”—she never limited her extraordinary life by her losses or by others’ labels.

Though the journalist, Wyatt Steele, is a fictional character, his articles are based on those that ran in the New York Times.

Download File
Here's a link to a recent CTV news article on the Empress.

Here is a link to a five-part series of videos that include some footage of an interview with Grace Hanagan (one of four children who survived) as well as divers' footage of the wreckage and interesting info on why the two captains' testimonies conflict. Done by the Montreal Gazette
Below are some of the many photos and illustrations that inspired me while I was writing.
Some pictures from the opening of the Empress of Ireland exhibition at Canadian Museum of History